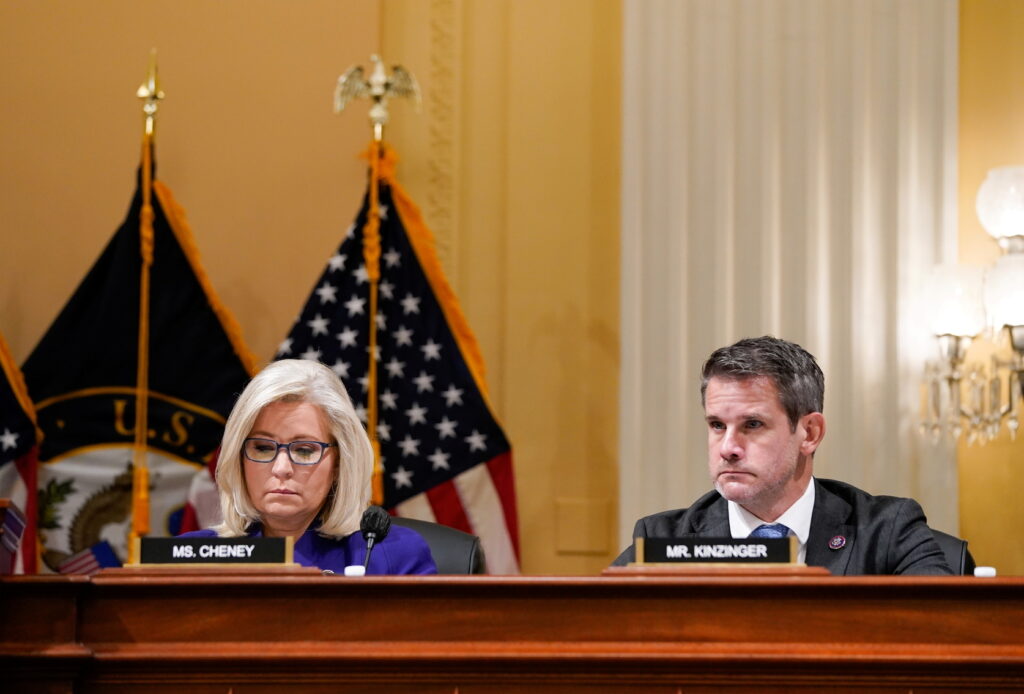 It is a critical time in the life of the “constitutional federal republic” known as the United States of America. It is a form of government wherein the people hold power through their duly representatives, who are bound by the principles enunciated in the Constitution, which created a national government consisting of a legislature, an executive and a judicial branch.

Those elected representatives have a long history of belonging to only two major parties, who battled every election for control of both the White House and Congress. Both parties had a long history of standing firmly behind the constitution.

In 2016, the republican party primary was diverse and a healthy debate on varied issues. Upon the election of Donald Trump as President, control of the party coalesced around Donald Trump as a central authority figure. There was no room for discussion or disagreement. The populist support for the Trump Presidency changed the institutional debate within the Party. In the words of President Trump, a critic is not a Trumpster.

Senator Mitch McConnell, the Minority Leader in the Senate, and arguably the second most powerful Republican in the Party, delivered, from the floor of the Senate, shortly after the January 6th, a scalding denunciation of Donald Trump, calling him “morally responsible” for the Jan. 6 attack on the U.S. Capitol. After the GOP censure of Cheney and Kinzinger, McConnell again took to the media to rebuke Trump’s version of what transpired on that fateful day, “We saw it happen. It was a violent insurrection for the purpose of trying to prevent the peaceful transfer of power after a legitimately certified election, from one administration to the next. That’s what it was.” McConnell clearly staking out a position of chief critic of Trump and his supporter’s version of the January 6th, 2021 attack on the Capitol, trying to stop the certification of the 2020 election results. Although many thought this would be the end of his influence in the GOP, they were very wrong.

The next chapter of his influence took place this week, when The Republican National Committee took the unprecedented step of of censuring Rep. Liz Cheney and Rep. Adam Kinzinger for participating in the committee investigating the Jan. 6 Capitol attack, calling the riot “legitimate political discourse.”. A remarkable show of support for Trump’s continued insistence that the election was stolen from him and any support for the attempt to investigate the riot is enough to label a republican as disloyal to the party. Even more significant, at least as it relates to Cheney, who is running for reelection in Wyoming, the RNC took the unprecedented step to change the rules that greenlights the national party to spend money on her Trump- endorsed primary opponent if it chooses. Kinzinger is not running for re-election.

The full RNC passed the censure resolution in a quick voice vote with only a few audible nos. The initial resolution was going to reportedly include text allowing House Minority Leader Kevin McCarthy of California to expel them from the conference but ultimately limited the measure to public rebuke. Cheney and Kinzinger have been under fire since voting to impeach former President Donald Trump over his handling of the Jan. 6 riots.

The resolution says the House Republican conference must “not be sabotaged” by Cheney and Kinzinger, “who have demonstrated … that they support Democrat efforts to destroy President Trump more than they support winning back a Republican majority in 2022.” In reference to the Jan. 6 committee, it describes the pair participating “in a Democrat-led persecution of ordinary citizens engaged in legitimate political discourse,” suggesting a broad effort across the party to dismiss the events at the Capitol that resulted in heated confrontations with police, arrests, injuries and deaths.

Censures are used by both parties against their own members, but they have no real ramifications. It is a party’s mechanism to discipline those who have the courage to deviate from widely held party positions. In this case, national Republicans are showing no willingness to support elected officials who openly criticize Trump and aid in the effort to uncover information about what led to Jan. 6 and who in power, including those in the Trump White House, may have been involved.

The most significant and rare move is the RNC ruling that allows the national party to specifically spend money on Cheney’s primary challenger Harriet Hageman. She won Trump’s endorsement last year but has struggled to keep up with the congresswoman’s fundraising pace. Unless there’s written approval by all committee members from a state, Rule 11 says the RNC “shall not” provide financial or in-kind aid to “any candidate for any public office … except the nominee of the Republican Party or a candidate who is unopposed” in a GOP primary without the “written and filed approval” of the three members of the RNC from the state involved. Obviously, based on the Wyoming GOP Party throwing Cheney out of their party in November of 2021, and the Chairman of the Wyoming GOP, Frank Eathorne, along with the two other committee members from the state, signing a letter to throw support behind Hageman, the RNC’s desire to oppose Cheney in a primary is a fait accompli.

With news of the censure, the two Republicans stood by their decisions to work alongside Democrats on the Jan. 6 panel. “I’m a constitutional conservative and I do not recognize those in my party who have abandoned the Constitution to embrace Donald Trump. History will be their judge. I will never stop fighting for our constitutional republic,” Cheney said in a statement. In his own statement, Kinzinger said the GOP has let “conspiracies and toxic tribalism hinder their ability to see clear-eyed.”

The censure has sharply divided the GOP inside and outside of Congress. Trump has taken repeated aim at Cheney and Kinzinger for their vocal criticisms of him, their impeachment votes and involvement on a committee that he has decried as a witch hunt. Yet, other Republicans who previously worked for the RNC condemned the censure resolution. Michael Steele, who was chairman from 2009 to 2011, called it a “pathetic act of cowardice taken by its current leadership.” And some current elected officials came to Cheney and Kinzinger’s defense like GOP Sen. Mitt Romney of Utah, who voted to convict Trump in his impeachment trial. “Shame falls on a party that would censure persons of conscience, who seek truth in the face of vitriol. Honor attaches to Liz Cheney and Adam Kinzinger for seeking truth even when doing so comes at great personal cost,” Romney said in a statement, who is the uncle to the chairperson of the RNC, Ronna McDaniels.

Some Republicans argue the party’s decision making all comes back to Trump, who still has a tight grip on the party as a potential 2024 candidate and the ability to make waves in the November midterm election. Because of historical trends where the party in power typically loses seats in midterms plus Biden’s low approval ratings, Republicans have a great shot at taking back control of the majorities in Congress.

In a prior article, we went into detail about the Sinema censure by the Arizona State Dems. When the Arizona Democratic Party’s executive committee formally censured Sen. Kyrsten Sinema as a result of her inaction on changing the filibuster rules to pass voting rights reform, they declared that “on the matter of the filibuster and the urgency to protect voting rights, we have been crystal clear. In the choice between an archaic legislative norm and protecting Arizonans’ right to vote, we choose the latter, and we always will,”

We outlined Sinema support for voting rights legislation and pointed out that, because of the Censure, she will go down in history as someone who stood in the way of civil rights. We asked the question, should she be able to move the Arizona Federal District Court for a DJ declaring, with precision, that she fully supports civil rights, and the Voting Rights Bill, but not via a change in the filibuster which she believes is designed to protect a minority party, one in which might be the Democratic Party in the Senator after the next elections?

Does Cheney have a similar argument to make? The RNC had no right to censure her and it was a deviation of the utilization of the purpose of a censure and it completely misrepresents her support for conservative values and the US Constitution, impugns her reputation and compromises her re-election chances. Rep. Cheney hasn’t opposed winning back a Republican majority in 2022; she just wouldn’t bend to the will of the Trump’s Republican Party. She believes the January 6th Committee work is wrapped in sustaining our constitutional republic.

Doesn’t Rep. Cheney and Rep. Kinzinger have the right to ask the Courts to correct the record so they will not go down in the annals of history as being against the party of Lincoln?

It certainly appears to be a critical time in the life of our “constitutional federal republic”, a republic bound by the principles enunciated in the Constitution, wherein a legislature, an executive and a judicial branch are supposed to work together for the common good. Should Cheney and Kinzinger have the right, or even further…. “the duty” as legislators, to investigate what many called an insurrection? Or does the RNC have the right to accuse the two Congress members of trying to undermine the former President, with impunity?

Doesn’t it seem logical for the Judicial Branch of our government to take a crack at how to resolve this polarizing issue wherein the legislative branch investigates the executive branch and what role, if any, it played in the attack on the Capitol? Isn’t it how the founders foresaw the three branches functioning, for the greater good of the country? Is the greater good even relevant anymore, for many, in this political climate?

I guess we will have to wait and see, won’t we?