Democrats Censor Senator Sinema, Does The Senator Have Any Legal Recourse? 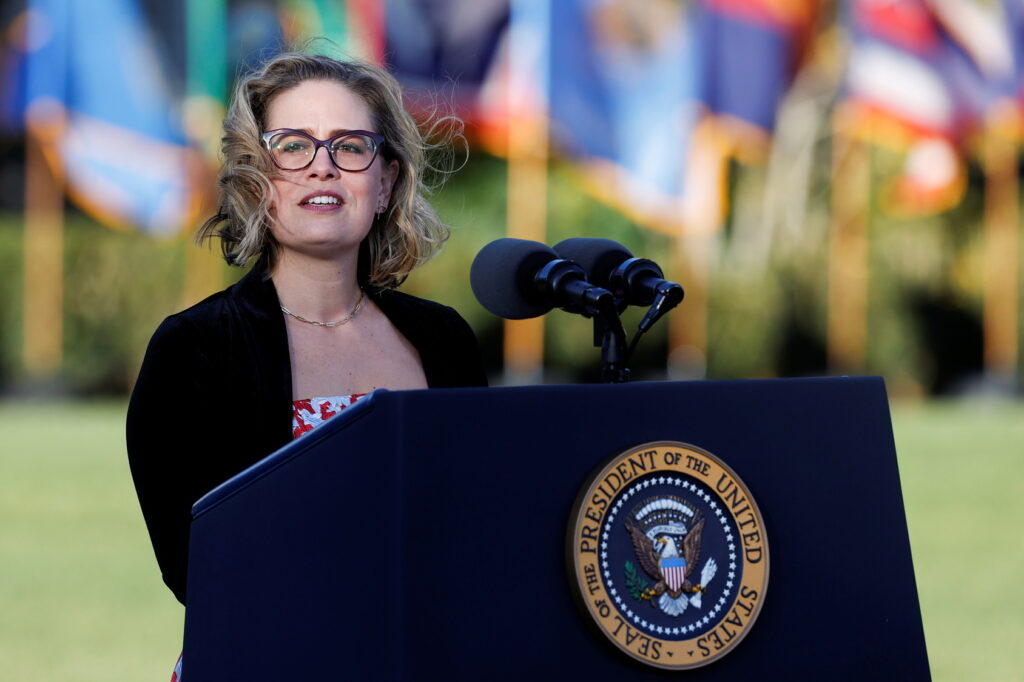 Does Senator Sinema have any legal rights to challenge this action? A review of several commentaries indicated that the censorship of Senator Sinema was a violation of her right of freedom of expression. In the general sense there could be a basis of facts to come to this conclusion. The Senator expressed support for the underlying civil rights legislation but felt the dismantling of the filibuster would place minority parties in a difficult position to protect their constituent’s interest. The position the Senator asserts is that she is in fact protecting the Democratic Party’s interest if the Party loses majority control.

The factual defense that the Senator asserts could lead to the conclusion that the censor is, in reality, a proscription of her freedom of expression.

Although the Senator cannot seek legal relief under constitutional law, it does not foreclose a right to petition the court. The Senator may have a right to a Declaratory Judgment (DJ), correcting the record as to the State Democratic Party’s allegation that she is against an historic Voting Rights Bill? A DJ is a legal action rooted in equity that allows a party to seek legal relief that will declare the party’s rights and obligations. This type of court action is usually reserved if there is not another adequate remedy under the law.

Since the actions the Senator took were generated from her official duties, the US federal court system would be the proper forum for a DJ. Rules governing the procedure for obtaining a declaratory judgment are contained in 28 U.S.C. §2201.
Declaratory relief has two elements a party must satisfy: “(1) a proper subject of declaratory relief, and (2) an actual controversy involving justiciable questions relating to [the party’s] rights or obligations.”

A declaratory judgment is normally appropriate when it will “terminate the controversy” giving rise to the proceeding. Certainly, that might not seem to be the case in the Sinema matter. The public debate will rage on for sure, but is a possible demand for a declaration from the Court declaring that Sinema is not against Voting Rights, a proper subject for a DJ and that the censor deviated from the Party procedures, causing the Senator’s actual position of the Civil Rights legislation to be obviated. The Senator would need a ruling from the court to protect her historical record on the Civil Rights legislation.

A proper subject for the filing of a DJ occurs when there is uncertainty as to legal obligations or rights associated with an event or potential future course of action. Relief offered by a DJ provides an immediate means to resolve this uncertainty

The US Supreme Court has noted that the proper subject matter of the litigation must be an actual controversy between the litigants. This second prong embraces the long-standing US legal dictate that the courts are the forum to resolve disputes between the parties. The Courts are not empowered to issue opinions on matters that are advisory or of a status, may be declared.

The petitioner must have a practical interest in the declaration sought and all parties having an interest therein or adversely affected must be made parties or be cited.

The Senator may assert a position that her political future and legacy revolves around whether she can convince a Court of Law to declare the Arizona State Democratic Party inappropriately used censure as a means to seek revenge against Sinema for staking out a political position contrary to what the State Party believes. The Senator needs to ask the Court to Declare that the use of the censure was an improper means to interfere with the Senators duties , impugned her reputation and distorted her position on the Civil Rights legislation. The Declaratory Judgment would also need to seek a ruling that improper use of a censure would harm the legislative role of US Senators

However, The Arizona State Dems would argue that since her declaratory relief, if granted, would not be effective in settling the controversy, then the court should decline to even hear the potential DJ. The federal rules guiding the proper litigation of a DJ does require some kind of resolution to “the dispute.” There is an argument that could be made that the State Democrats that the perceptions stated in the DJ relief are not actual controversies and that Senator Sinema is merely seeking the court’s opinion

It seems that both sides of this issue can make a compelling argument for and against the use of a DJ resolving/not resolving this matter.

When the Arizona Democratic Party’s executive committee formally censured Sen. Kyrsten Sinema as a result of her inaction on changing the filibuster rules to pass voting rights reform, they declared that, “on the matter of the filibuster and the urgency to protect voting rights, we

have been crystal clear. In the choice between an archaic legislative norm and protecting Arizonans’ right to vote, we choose the latter, and we always will”.

Senator Sinema alleges that she strongly supports voting rights legislation but because of the censure, she will go down in history as someone who stood in the way of civil rights. Should she be able to move the Arizona Federal District Court for a DJ declaring, with precision, that she fully supports civil rights, and the Voting Rights Bill, but not via a change in the filibuster which she believes is designed to protect a minority party, one in which might be the Democratic Party in the Senator after the next election for her seat?

If Senator Sinema has any legal means to address the censure, it would be confined to a Declaratory Judgment. If the Senator opted to pursue this relief in Court, the actions of both Parties will come under scrutiny for the public consumption.

The new tech offering relief from the misery of period pain

With pestering defense and a balanced offense, the Eagles get back to the Super Bowl.