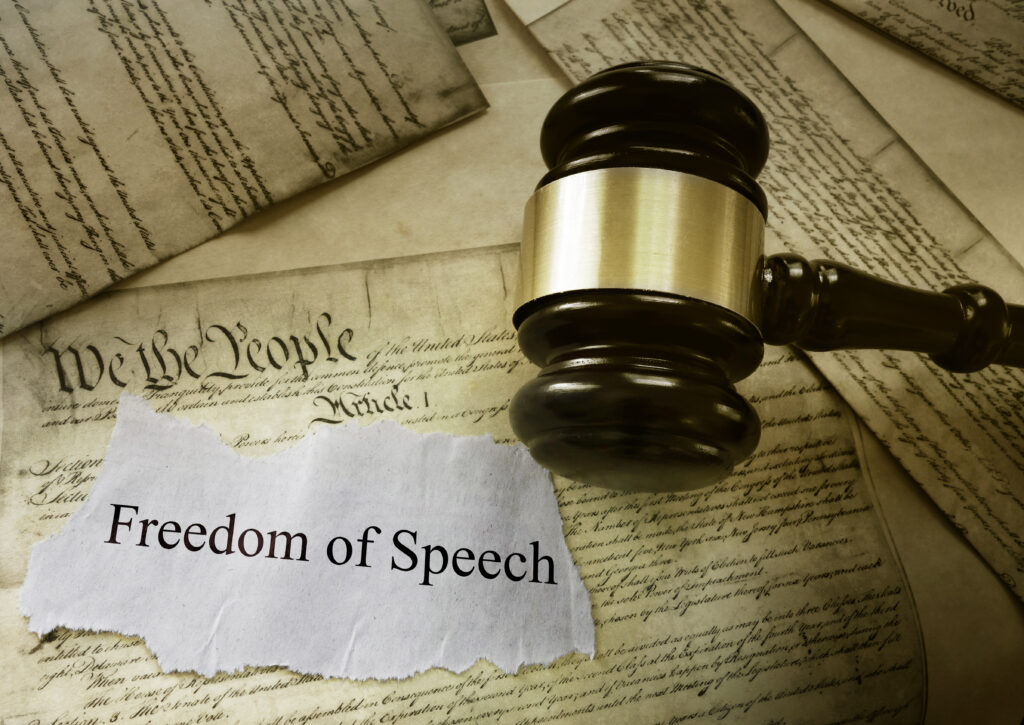 The First Amendment of the US Constitution protects free thought, speech and expression of the thoughts and speech. By definition the constitutional protection extends to the written word and varied digital backgrounds.

The First Amendment also provides protection for speech and the expression of thoughts that are offensive, vile and unpopular. The ACLU filed an Amicus Curia Brief in the significant case of Snyder v. Phelps, in which the Westboro Baptist Church, Westboro, was sued for staging a protest at the funeral of a slain US Soldier, who was killed in action in Iraq. Westboro had engaged on a pattern of vile protest at funerals of varied US military personal and denounced the US and Catholics, usually with putrid signs that depicted hate and their particular religious belief that is asserted to justify their opinions. Westboro abided by the local law of assembly and honored the terms with the local authorities as to the staging of their protest. According to testimony during legal proceedings after the funeral, the family of the soldier did not see the protesters signs. However, the father of the young soldier found a blog called Epic which is hosted on Westboro’s website.

The article posted on the blog viciously attacked the soldier and his family, celebrating his death and spewing hateful anti-Catholic theories.

The family was directly assaulted by the hate and sued Westboro for varied causes of action which are rooted in the tort of the intentional infliction of emotional distress. Although each jurisdiction has some different elements of this Tort, LSU law school’s Law Center publication presents a fairly universal definition of the elements a Plaintiff needs to establish.

An examination of the elements would lead one to conclude that the family of the slain soldier had a viable claim against Westboro.

“A jury found for the Plaintiff on the intentional infliction of emotional distress, intrusion upon seclusion, and civil conspiracy claims, and held Westboro liable for $2.9 million in compensatory damages and $8 million in punitive damages.”

The case worked its way up to the US Supreme Court and it overturned the lower Courts decision, and the verdict was set aside based upon the First Amendment.

There are two contemporary cases that may be examined under the same Appellate analysis.

In December 14, 2012, twenty children in The Sandy Hook Elementary School were killed along with 6 teachers in Newtown, Connecticut. Although the horror of the mass shooting was decried globally, Alex Jones used his media platform InfoWars to spread the lies that the shooting was a hoax, and the parents of the children were actors pretending to be grieving parents. Jones claimed that the government commissioned the parents to act as the grieving parents to enable the removal of guns from the American population. The lies that Jones published through InfoWars caused the Parents to be subject to death threats and harassment.

Two of the parents sued Alex Jones and InfoWars in Texas for varied causes of action with defamation as the basis of the claim. Defamation has two components, slander and libel. The Oregon Bar Association provides a solid overview of these components, “Defamation is defined as a false statement communicated to another person that damages your reputation. Libel is communicating a defamatory statement by writing or picture, while slander is defamation by oral or spoken communication”.

In the Texas case a jury heard evidence of both slander and libel and returned a verdict of $4.1 million.

An appeal of this verdict will be examined against the First Amendment.

The second case that is still taking testimony, as of the publication date of this article, is being tried in the Waterbury Superior Court in Connecticut. In this case the trial is centered on the issue of damages. The liability, meeting the false statements elements, was established due to the Defendant’s contempt and default in meeting its responsibility to comply with discovery orders.

In Part 2 of this series, MGSN Legal will examine the First Amendment analysis of potential InfoWars Appeals.