A Tale Of Two Courts 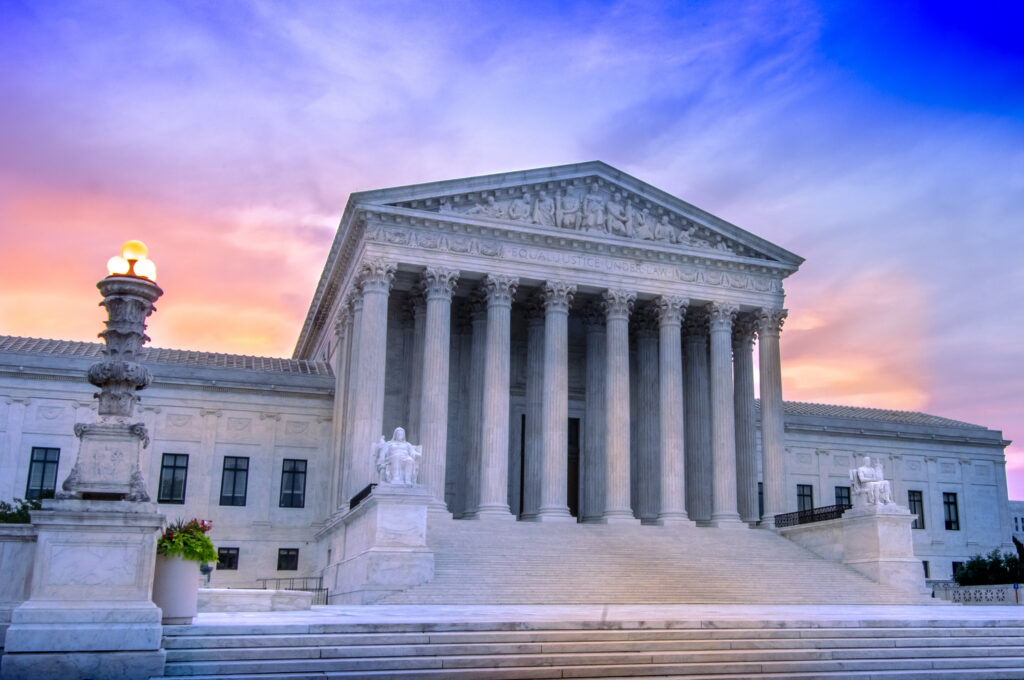 The Supreme Court, in a controversial 5-4 decision put the lower court’s ruling on hold, effectively allowing Alabama to proceed with its preferred map as it prepares for primary elections in May. Many legal scholars opined that the Majority’s decision is at odds with well-established precedent and, in effect, decided the issue, despite holding the lower court’s ruling in abeyance, since it prevented what would have been a re-drawn congressional district that would have favored a minority’s election (a Democrat) in that second seat the lower court ordered.

Most noteworthy is the dissent of Chief Justice Roberts. The same jurist who wrote the majority opinion in Shelby County v. Holder, wherein the Court ruled, in a 5-4 decision, that the preclearance formula in the Voting Rights Act, was now unconstitutional under the 10th Amendment, which gives states the power to regulate elections. The Court ruled that the coverage formula was “based on 40-year-old facts having no logical relation to the present day.” Certain States with a history of discriminating against minorities voting rights had to get pre-clearance from the Justice Department for re-drawn election districts.

Roberts also joined in Justice Scalia in a scathing dissent in a 2015 SCOTUS decision on another litigation concerning a re-drawn electoral map in Alabama Democratic Conference v. Alabama and Alabama Legislative Black Caucus v. Alabama, docket number 13-895, wherein the plaintiffs challenged the state’s legislative redistricting plan. The Opponents, just as in the case decided on Monday, argued that the new plan relied too heavily on race and racial gerrymandering and that the new plan packed black voters into existing majority-black voting districts, thus diluting their overall voting power in the state. This was the first voting rights case before the Supreme Court since it struck down a key portion of the Voting Rights Act by 5-4 in the aforementioned case, Shelby.

On March 25, 2015, the court in a 5-4 opinion ruled that a lower court must reassess whether Alabama improperly packed too many black voters into certain districts, diluting their strength in other parts of the state. The ruling simply called the lower court’s decision “legally erroneous” and sent the case back to it without ruling whether Alabama’s redistricting plan is unconstitutional. “The appeals focus upon the appellants’ claims that new district boundaries create ‘racial gerrymanders’ in violation of the Fourteenth Amendment’s Equal Protection Clause,” Justice Stephen Breyer wrote in the majority opinion. “We find that the District Court applied incorrect legal standards in evaluating the claims.”

Justice Anthony Kennedy was the swing vote on the case and joined the court’s four liberal justices to make up the majority.

But while Breyer only remanded the case backed to the lower court for further consideration, he strongly suggested that some of the districts should be deemed unconstitutional. “That Alabama expressly adopted and applied a policy of prioritizing mechanical racial targets above all other districting criteria (save one-person, one- vote) provides evidence that race motivated the drawing of particular lines in multiple districts in the State,” he wrote.

The decision sent a clear message to lawmakers across the country that the Voting Rights Act can’t be used to justify maps that predominately group voters together based on their race.

Or that’s what most legal scholars believed until Monday’s decision which completely disregarded the precedent in the 2015 Alabama Supreme Court decision.

So how can we make sense of the Chief Justice and his seemingly inconsistent positions in both the afore-stated SCOTUS decisions? Well, lets take a look at what happened in the lower court, before the Supreme Court ruled, and then we will get back to the Chief Justice.

The arguments in the lower court, that the state had illegally packed many Black voters into a single district while dispersing other clusters of Black voters across multiple districts, were basically the same as the 2015 case. The effect of the map, according to the challengers, is to minimize the number of districts in which Black voters can elect their chosen candidates. It seems like the lower court properly followed the SCOTUS precedent?

What is very noteworthy is the makeup of the three-judge district court – made up of two district judges appointed by President Donald Trump and a court of appeals judge appointed by President Bill Clinton, who ordered the state to draw a new map. The court agreed with the challengers that the plan likely violates Section 2 of the Voting Rights Act, which bans racial discrimination in voting policies.

The court wrote that the state’s legislature gets first dibs to draw a redistricting plan that includes two majority-Black districts, rather than just one, and it gave the state two weeks to do so. But if the legislature can’t get the job done in time, the court continued, it would hire an expert to draw a new and improved map.

On Jan. 27, the three-judge court turned down the state’s plea to put its order on hold while the state appealed. Calling the state’s request “effectively an unsupported motion for reconsideration,” the court characterized the case as a “straightforward Section Two case, not a legal unicorn.” And it stressed that its decision to grant a preliminary injunction “rests on an extremely robust body of evidence” created by a seven-day hearing featuring testimony from 17 witnesses and over 1,000 pages of briefing. The question of whether the challengers are “substantially likely to succeed on the merits of their Section Two claims” is not, the court concluded, “a close one.”

The State of Alabama filed in the Supreme Court the next day, asking the justices to hold in abeyance the district court’s order while it appeals. In a brief order on Monday, the court granted that request and set the dispute for oral argument sometime next fall.

Chief Justice John Roberts filed a dissenting opinion, from the court’s decision to put the lower court’s order on hold, although he did not join Justice Kagan’s dissent. Instead, Roberts noted the uncertainty that surrounds what litigants must currently show for a vote-dilution claim. To clarify the law, Roberts wrote, he would hear oral argument in this dispute over the map, but he would not put the district court’s order on hold because it is, in his view, consistent with current voting-rights laws. Therefore, he concluded, the district court’s analysis should govern the 2022 election, while “subsequent elections would be governed by” the Supreme Court’s ruling in this case.

A remarkable decision in that leaves it leaves Roberts isolated from the Conservatives on his Court. Based on Robert’s past positions on this issue, he doesn’t seem to be disagreeing with the substance of the Conservative’s position but he clearly does not agree with the manner in which the Supreme Court is moving and his position, as the Chief Justice, is being disregarded by the 5 conservatives on the Court. Certainly, the lower court’s ruling was very well written by mostly conservative judges, who were following precedent and the majority’s disrespect for that process might be what is driving Roberts at this point in time.

Substantively, Roberts stated that he was willing to look at the precedent and address the mess that voting dilution cases have created, seemingly referencing Scalia’s 2015 dissent that he joined. In a prior Supreme Court decision, Roberts referred to the Voting Rights Act and its requirement to consider race, as a “ sordid business.” Most importantly, he would have upheld the lower court’s ruling, allowed the second minority seat to be drawn and then, argue next year, as to the viability of the prior SCOTUS rulings on this issue.

So the Chief Justice is not being inconsistent substantively. He seems to be speaking to what he sees as a disrespect for the proper procedures as it relates to lower court rulings, more than weighing in on the critical legal issue of the case.

Israel says Sudan peace deal to be signed in Washington

Punxsutawney Phil is not the only furry forecaster

‘0ktapus’ hackers are back and targeting tech and gaming companies, says leaked report

Kylian Mbappé ruled out for three weeks with left-thigh tear

‘Murf the Surf: Jewels, Jesus and Mayhem in the USA’ Review: A Dashing Thief’s Darker Side